I miss my dad.

Not merely because it's Father's Day, but probably because it's 8 p.m. on a Sunday evening, generally the time when I would call to catch up on his week and fill him in on mine.

I looked forward to our conversations. For the most part his weeks were fairly routine – church, the occasional outing or visitor, perhaps the passing of someone in our home town. Depending on the season, we would chat about the state of my beloved Habs or discuss reasons why Mike Weir just couldn't seem to get his golf game together anymore.

The conversation would occasionally make a foray into the entertainment world – a world one would think a small town, visually impaired man in his 80s would know (or care) little about. But dad liked to keep up on everything, and I think it gave him great pride to toss some random comment about Madonna's latest antics into the mix.

One time he informed me about a Springsteen news story before I even heard about it. I was regaling him about my recent concert in Cleveland that week and he just sniffed and said, "Springsteen? I wouldn't cross the street to see that guy. He doesn't even know where he is." His comment alluded to Bruce's following show in Detroit in which he welcomed the crowd by saying, "Hello Ohio!" My dad with his pulse on all things newsworthy heard the story before I did. And it's not very often when I can be upstaged in the realm of Springsteen.

I was always surprised about how much dad knew about everything – whether discussing sports, world events, politics, entertainment or local history. The man had a phenomenal memory. It was always a learning experience to watch any kind of sports game with him. You wouldn't be five minutes into the game before he'd be lobbing question at you: "What's unusual about the fellow pitching right now?"or "What town is that hockey player from?"

An avid reader before age-related macular degeneration kicked in full force, dad enjoyed reading many newspapers and magazines as well as any sports and historical books he could get his hands on. And I'm convinced he had a photographic memory since he had so many statistics, facts and interesting tidbits at the ready, regardless of the conversational topic.

In his later years he relied on an intricate system of radios (each set to a different channel) and the television to keep up on his favourite shows and the latest news.

He passed away March 20, 2010 and I still find myself reaching for the phone, thinking I've got to tell dad about some interesting story I just heard or get an answer to a question I know he will be able to answer easily. I miss him most during the hockey season, especially over Christmas, when we would watch everything from the NHL, to the Juniors World Championship and the Spengler Cup.

But mostly, I miss him Sunday nights. 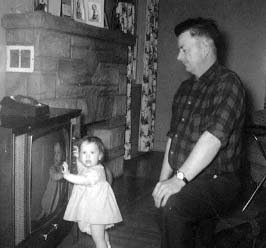 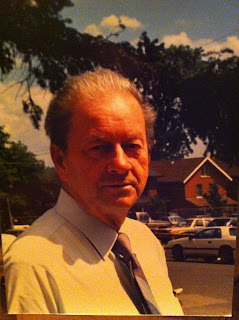 Posted by BarrieCrazyJaney at 19:55 No comments:

When do you know you've crossed the line from fan to stalker?

Last night I had a dream that I met Bruce Springsteen.

One would think such a dream would bounce me awake feeling refreshed, rejuvenated, ready to face the day singing "Glory Days" at the top of my lungs. Mais malheureusement, I awoke feeling stressed and concerned.

You see in my dream, I encountered Bruce with a group of my friends and we invited him back to my house for dinner; an invitation he accepted without hesitation (we were having ribs . . . not sure if that was the selling feature). While initially I was beyond thrilled to be hosting Bruce, it suddenly struck me: he was coming to my house. My house which is practically a shrine to all things Bruce.

How would he react to the Bruce Springsteen hallway which features at least 10 different posters or pictures of Bruce and the band? Which book from my Springsteen library would he pick up first? Or would he grab a Backstreets magazine? Would he find my poster from the Magic tour – framed with three of my concert tickets and pit wristbands – amusing and quaint?

All I could think of was, thank God my full-size cut-out of him from the Born in the USA tour was still at work.

Now, before you think I'm a complete whack job, my friends got the cut-out for me for my 50th birthday. Best ... birthday card ... ever. 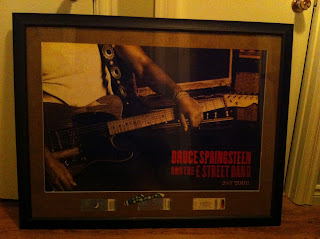 Bruce never even made it to my house in the dream. I woke myself up in a mad panic before he could get there.

When do you know you've crossed the line from "really big fan" to your friends telling you to seek psychiatric help?  I don't think I've hit that stage yet, but I do know that when it comes to Bruce, I have very little impulse control. New book coming out? I've already pre-ordered it. Rumour of a tour date in Buffalo? Room booked before it's even confirmed (hey, they fill up fast).

I spent almost two hours on hold trying to get tickets for the premiere of The Promise at the Toronto International Film Festival a few years ago. My Taurus tenacity would not let me hang up.

As far as obsessions go, I think it's a fairly healthy one. I'm sure my fellow Tramps would agree.

And Bruce would probably have been quite comfortable in the Springsteen hallway. At this stage in his career he is used to the crazy things his fans have done over the years. My collection probably pales in comparison to having fans sing all night outside his Barcelona hotel or knowing that fans book European vacations around his European tour schedule. Or even that fans collect little rocks from his childhood home . . . oh wait, that's me again.

And besides, he would have enjoyed the ribs.
Posted by BarrieCrazyJaney at 20:08 No comments: