What happened to my cone of immunity?

I used to brag about my cone of immunity when it came to my health. Being of hardy stock, it is rare for me to succumb to any bug decimating my fellow office mates. If I feel a sniffle coming on, I simply power drink some green tea and said sniffle goes away.

I mocked those who line up for their annual flu shot – just try and penetrate my cone of immunity little feeble flu virus!

One morning last week as I completed my post-shower ritual of washing down my blood pressure tablet, applying the Cortisone cream to my rash, and putting a drop of antibiotic solution into my right eye, I realized the cone had been severely breached.

May Day! May Day!

It appears that I am not having a good year medically since turning 50 ... or so it seems.

It started back in February when I noticed that the lines on my computer screen seemed a little bendy. I initially put it down to my cheaters – the drugstore glasses I use to read everything these days (they must be using smaller fonts). Perhaps it was time to move up to the real things. But, having the Internet at my disposal, I decided to Google "straight lines appearing bendy," and wouldn't you know it, got a few hits. When I read words like "retina" and "macula" in some of the explanations, I decided it was probably prudent to visit my optometrist, giving my father's history with Age-related Macular Degeneration (AMD).

Long story short, it turns out I have a bleed in my right eye – not early onset of AMD, though the treatment, an injection directly into the eye, is very similar.

Yes, an injection directly into the eye.

As scary as that might sound, it's actually quite painless. I've had five injections to date and they have helped decrease the bleeding and reduce the bendiness.

The waiting room on injection day is filled with a multitude of senior citizens and me. It's very entertaining and I've made some new friends. Apparently long life can be attributed to golf and bridge, or so I overheard the 99-year-old woman in the chair next to me tell another injection recipient. I want to ask her if cribbage is a suitable substitute since I don't play bridge, but I haven't mustered up the courage yet.

The day I received my first injection, I told the doctor, "If all those old dollies and dudes can handle a shot to the eye, I should suck it up and take my shot." He commented that women seem to handle the injections better. Good for us.


The blood pressure issue reared its ugly head around the same time, and no, they're not connected (I asked). I tried avoiding medication by making a few lifestyle changes to reduce my 180 over 99 bp but it didn't help. Sometimes you have to resort to drugs.

And the rash ... well, it appears to be some allergic reaction to a plant, or poison ivy. I had one spot on the palm of my right hand that was so itchy I wanted to take a knife to it. But it's finally going away, so I don't feel quite like a leper any more.

I can only hope that the cone is just going through a mid-life crisis of sorts and will soon be back on track.
Posted by BarrieCrazyJaney at 19:24 No comments:

This song is a co-write by myself and my friend and co-worker Kristin Taylor. You can read more of Kristin's stuff here. While the lyrics don't reflect it, the song was actually inspired by my having to wait for my electrician to show up. He would say he was coming at 8 a.m., then show up at 8:30 a.m. The next time he was coming at 9 a.m. but arrived at 9:45 a.m. What can a girl do but turn it into a song? Thanks K!


Waiting for Dave
Just another red wine mistake
That you can't take back
So here you sit
With one more regret.

Waiting for Dave
Just an exercise in patience
And self control
So here you sit
Trying to forget
Waiting for Dave.
Posted by BarrieCrazyJaney at 20:43 No comments:

As a self-confessed, (albeit, mild mannered) road rager, this will likely be the first of many vents from my observations behind the wheel.

What do people do at red lights?

Did they just discover that Facebook went public and are feverishly moving stocks via mobile phones to make room in their portfolio for a few shares? Have they picked this moment to declutter their purse?

All I know is that once the light turns red, it shouldn't take more than two or three seconds to transfer your foot from the brake to the gas and move on through to the other side. But does this always happen? No. More often than not, I find myself waiting a good 10 seconds or more for the car in front of me to move.

It's like some drivers put their vehicles in park during a red light, or suddenly forget where first gear is when the light turns green.

And don't even get me started if we're talking about a left turn flashing advance green light. It is the job of the lead car to get as many people through that light as possible. That's the only way the whole team wins. Be a good captain people – don't leave any soldiers behind! It is totally unforgivable when only the lead car gets through.

While I do find this frustrating, I have yet to be pushed over the edge enough to honk my horn. I did have an interesting dilemma on one occasion however, when I was travelling behind what appeared to be two Hells Angels motorcyclists.

It was a bit disconcerting to discover they were following the same route home as I, but I was even more perturbed to find myself waiting for them to get their bikes moving at each traffic stop. The third time l waited behind them at the red light, I pondered to myself: "Hmmmm. Would they think it was really ballsy of me to honk my horn at two Hells Angels to get them moving, and give me props or would they get off their bikes and pound the crap out of me?"

I didn't think it prudent to test my hypothesis but it did make me chuckle the rest of the way home. And I was more than relieved when they blew past my turn taking them (hopefully) miles away from my neighbourhood.
Posted by BarrieCrazyJaney at 20:24 No comments:

They may not be gourmet meals, but since leaving the parental nest many (many) years ago, I have survived and somewhat thrived on the few basic culinary skills I possess. And I was happy with my simple meals.

But then 18 months ago my friend Pat moved in and rendered me totally useless in the kitchen.

Pat enjoys cooking and experimenting with new recipes. I have been content in my new role as sous chef, blissfully chopping up whatever veggies are required for our meals, setting the table or opening pickle jars. It's all good. 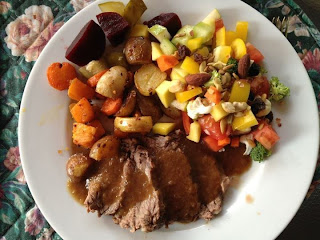 Sometimes we even like to play with our food. 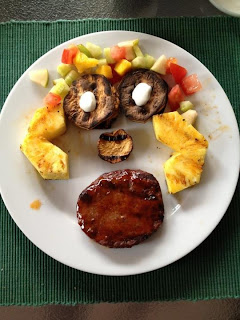 It's just that kind of household.

But Pat is away right now on a two-week holiday and I suddenly find myself wondering where she hides the food. It's not a big house – the food must be here somewhere. It was here before she moved in. Did she cook it all?

Last night was takeout pizza. Tonight I met my friend Kimberly at the movies and enjoyed a fine meal of popcorn. Tomorrow, I'm meeting my sister Andrea and a few other friends for the Screen One showing of Hysteria. I imagine we'll go out to eat beforehand or afterward.

Ok; that gets me halfway through the week.

On Thursday my work mates and I are taking our vice president out for drinks (he's retiring), so I imagine we can order wings or something. This weekend I'm heading to the Mariposa Folk Festival, so there will be tons of delicious concession food.

Hey – this cooking business is easy! It's just like riding a bike.

Next week I've got golf (so, dinner at the clubhouse) and dinner out with my friend Carol. I head to the cottage with friends on Friday, so really, I only have to worry about two other meals.

Whew! Pat will be so proud of me surviving on my own.

Maybe I'll welcome her home with a nice, cooked meal . . . from Mucho Burrito.

Posted by BarrieCrazyJaney at 20:25 No comments: