On the afternoon of my recent Bruce Springsteen concert in Toronto, I tweeted, "The dehydration process begins" and my non-Springsteen friends did not know what this meant.

Let me explain: Since discovering – and experiencing – our first general admission (pit) section at a Springsteen show back in 2008, my friends and I have a hard time going back to sitting in seats ... well, not that we really ever sat in them.

The lure of the pit is just too strong. The absolute joy of being close to the front within drippage range of some Springsteen sweat, or God forbid actually touching the man or his guitar, immersed in a sea of singing and dancing Tramps is hard to describe, but it is joyous indeed.

That being said, the pit is not for everyone. So here are a few things to keep in mind to make your pit experience more enjoyable.

WEAR COMFORTABLE SHOES
You are going to be standing for a long time so comfortable shoes are critical. The pit is no place for your four-inch stiletto sling-backs. The line-up for general admission (GA) usually starts around 4 p.m. Once you get your numbered wristband, you are lined up in chronological order. Generally, you are let into the venue around 6 p.m. The concert will likely start anywhere between 8 and 8:30 p.m. Then the show itself will be at least three hours long . . . Toronto's Aug. 24 show was roughly three hours and 45 minutes. That was almost eight straight hours of standing. Some people do opt to sit down in the pit prior to the show but it's not always an option. Plus, you take the chance of being stepped on, spilled on or some other kind of on . . . none of them pleasant.

LIMIT YOUR BEVERAGE INTAKE
You are gong to be in a tight space, surrounded by hundreds of people for several hours. Trying to navigate your way out of the pit and more importantly, back to your space in the pit, is tricky, so you want to avoid or limit those trips. Hence, the dehydration process.  We usually try to have a good hearty lunch prior to the show and then cut off any beverage intake directly afterwards. It always amazes me to see people drinking in the pit.  The road in and out is not an easy one and I can't fathom why people would be up to that challenge multiple times. Hey, I enjoy a nice, cold beer just like anyone else, but I don't mind waiting until after the show. It's too much work to make that trek. And while there always seems to be extra space around you when you first position yourself in the pit, those spaces seem to tighten up as the concert start time approaches. Sometimes people don't make it back to their original spot.

MAKE FRIENDS WITH THOSE AROUND YOU
At the risk of sounding repetitive . . . you are going to be in a tight space, surrounded by hundreds of people for several hours. Why not get to know a few of them. They may turn out to be that new friend who gets you GA tickets for the upcoming Ottawa show in October – thanks Carolyn!

BE WARY OF THE TALL SPRINGSTEEN FAN
Bruce seems to have an abnormal abundance of extremely tall male fans. And by tall, I don't just mean 5' 11" or 6'. No, these guys are 6'4", 6'6", and even taller! Being vertically challenged (5'2") it's key for me to position myself in the section with the least number of tall people in front. You may think the best spot is at centre stage, but sometimes it's more prudent to be slightly off-centre based on what's in front of you.

But while the tall, male Springsteen fan can be a pain-in-your-sightline, it is part of the Springsteen concert enjoyment factor to witness the outpouring of man-love for Bruce. You would think it would be strictly females crowding the front of the stage for the opportunity to touch Bruce, but there are tons of dudes too.  They're there with their dude buddies (they're usually the ones who don't mind fighting their way through the pit quicksand for a few beers) singing at the top of their collective dude lungs, dancing in their dude styles and pumping their fists with equal abandon to "Badlands."

It's fun to watch.

MEDITATION SKILLS ARE NOT MANDATORY BUT DEFINITELY HELPFUL
Two hours into your pre-concert pilgrimmage you may find it necessary to go to your non-Bruce happy place for a few minutes in order to survive the next few hours waiting for the show to start.  In addition, Tweeting and/or updating your Facebook page may help pass the time, as well as waving to your friends in the stands who have opted for seats.

POST-CONCERT MASSAGE
I was over-the-moon excited to discover I was due for my monthly massage on the Monday after returning from my Springsteen show in Boston. Twenty hours in a car, plus the pit, equalled some pretty sore limbs. Needless to say I have pre-booked a massage for the Monday after my weekend of double-pit Bruce in Ottawa and Hamilton this October.

BE PREPARED FOR THE CHANCE YOU MAY NOT BE IN THE PIT
At the big stadium shows, everyone with a GA ticket makes it into the pit . . . the random number draw just decides positioning. At the smaller arena shows, only a portion of GA ticket holders make it into the main pit; the rest go into a secondary general admission area. When the random number is called, there are winners and losers on that train to the land of hope and dreams and I've ridden in both sections. If you don't make it in, do not despair. My friend Kimberly and I didn't make it in at a show in Cleveland but we ended up against the fence that divided the pit from general admission. Bruce generally travels during his shows and he ended up right in front of us for a few songs and we were both able to grasp a Springsteen limb. Magical!

Regardless of whether you're in the pit or dancing in the stands, you will enjoy your Springsteen concert experience. There is nothing else like it. It is a musical marathon of mystical happiness, and there is no other place I'd rather be. 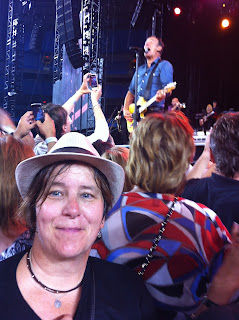 Posted by BarrieCrazyJaney at 19:03 2 comments: